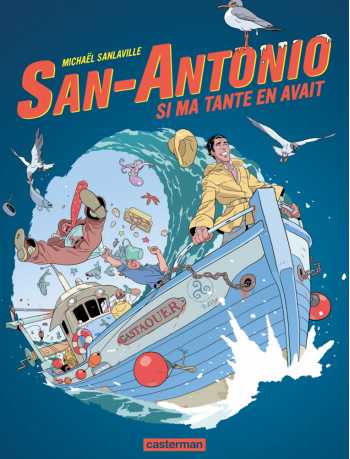 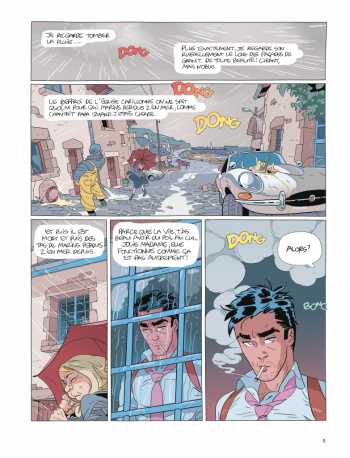 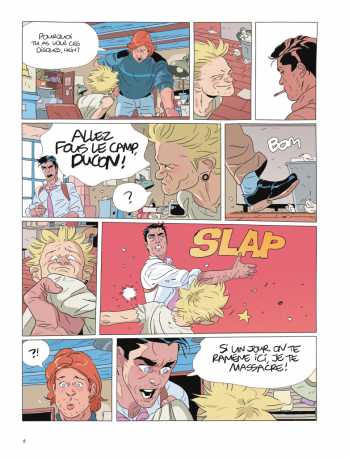 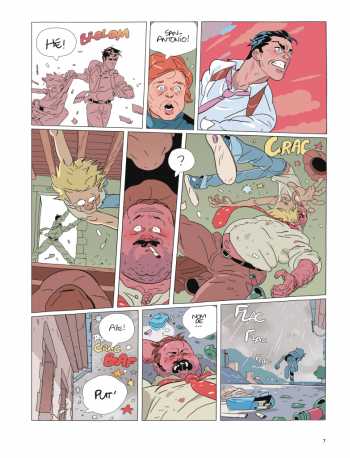 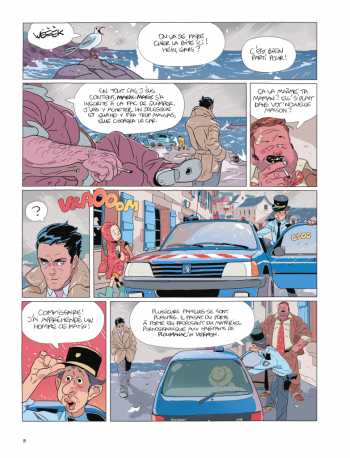 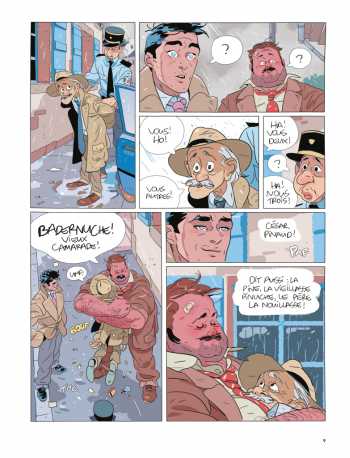 The sex and action and cartoonish violence are raised to the nth degree in the second volume of this new series written and illustrated by Michael Sanlavalle, illustrator of Rocher Rouge and Le Fleur Vert, and co-creator of Lastman. Bodies fly in every direction!

San Antonio is a series of eccentric crime novels written by Frédéric Dard about a Detective Superintendent, Antoine San-Antonio, and his partner, Bérurier. The wildly successful series comprised 175 volumes, published from 1949 to 2001.

Sanlaville's adaptation features far too much nudity and sex to ever be published in America, so enjoy this French album without any fear of it ever being translated.

San Antonio and his whole gang are transferred to Ploumanac'h Vermoh, in Brittany. A quiet village where nothing ever happens. The bloodhounds, however, are quickly brought in to investigate a sailor found drowned in the sea with fresh water in his lungs. The apparently minor news item hides something much bigger...

It is difficult to adapt a universe as unique as that of Frédéric Dard. The recipe is well known: a casual cop, inventive language (slang, regionalisms, neologisms, bilingual puns, etc.), incredible sex scenes and above all, fun. But you still have to prepare all these ingredients. This author is not shy. With great aplomb, he extracts the substance of the novel and the result is fully satisfactory and coherent.

His cartoonish and slightly crazy drawing blends well with the work of the novelist for whom everything is played in excess. His characters have character. To the hero, he gives a face similar to that of young Alain Delon; a female villager evokes a huge, aging and libidinous Brigitte Bardot. The design is creative and dynamic, particularly the panel borders which are frequently curved or oblique, even downright wavy when they accommodate a ship in the storm. Finally, the artist has fun filling in his panels; often the actors seem cramped in, almost as if they want to burst forth, which happens on occasion!

A pleasant adaptation where the form and the content recall the work of the writer who died in 2000.

Detective Superintendent Antoine San-Antonio is a kind of French James Bond without gadgets, flanked by two colleagues, the old, sickly but wise inspector César Pinaud and the gargantuesque inspector Alexandre-Benoît Bérurier. He is a member of the French secret service and has to fulfill impossible missions given by "Le Vieux" (the Old Man), later known as "Achilles", the head of the French police. With the help of his colleagues he always succeeds through various adventures.

Written in a classical crime novel style at the beginning in the 50's (classic spy stories), San Antonio adventures become more satirical from the beginning of the sixties and leave the strict format of the crime novel literature.