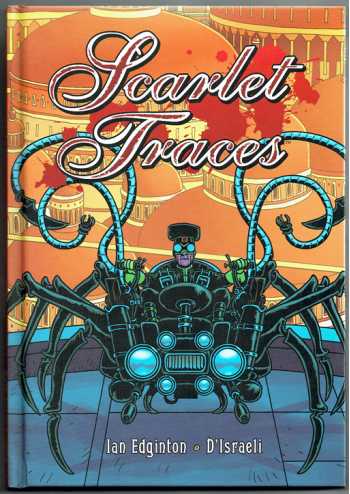 Out of print. The first printing of the original edition.

A Scientific Adventure by Messrs Ian Edginton & D'Israeli, purveyors of fantastic fiction for young gentlefolk and the mentally deficient. A decade after the Martians' abortive assault on the Earth and their attempt to establish an invasion bridgehead on the British Isles, the industrious Victorians have assimilated the Martian technologies into their everyday lives. Hansom cabs now scuttle along the Capital's streets on multi-limbed crab legs and the terrible monopoly of the Martian heat-ray has assured the dominance of the British Empire over two thirds of the Earth's surface and whose benign tyranny looks to continue to do so far into the next century. However, there is something rotten at the heart of empire. When the bodies of several young women are found washed up on the Thames, drained of blood, enter Captain Robert Autumn (retired soldier turned gentleman-adventurer) and his former Sergeant Major-now manservant-Archie Currie. Together they are drawn into the mystery which leads them from the gin palaces of the East End, and the grinding poverty of the North, to Whitehall's corridor's of power and the very Hall of the Martian King!