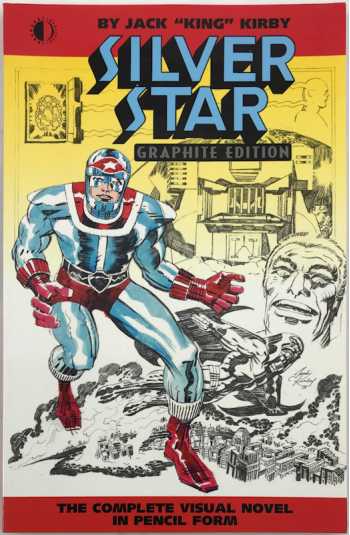 Kirby's un-inked pencil art for the six-issue mini-series, plus loads of background and extras. Out of print.

Legendary artist Jack Kirby first conceptualized Silver Star in the mid-1970s as a movie screenplay, complete with illustrations to sell the idea to Hollywood. Too far ahead of its time for Tinseltown, Jack instead adapted his "Visual Novel" as a six-issue mini-series for Pacific Comics in the early 1980s, making it the last original creation of his career. Now, in Silver Star: Graphite Edition, "King" Kirby's final, great series is collected at last, this time reproduced from his powerful, un-inked pencil art! Read the complete story of Homo-Geneticus, the New Breed of humanity that spawns both hero (Silver Star) and villain (the nefarious Darius Drumm), leading to one of the most action-packed narratives and spellbinding climaxes ever conceived on a comics page!