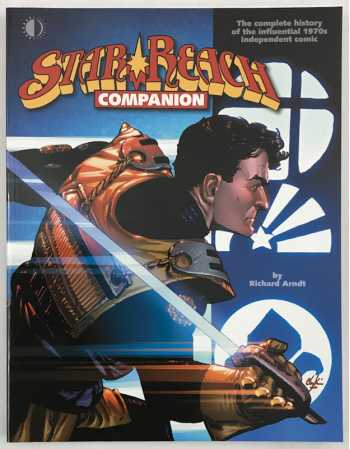 Out of print. The Star*Reach Companion is a complete history and bibliography of the 1970s ["Ground-level"] independent comic.

In addition to extensive historical coverage and interviews by author Richard Arndt, the book also features full stories from Star*Reach and its sister magazine Imagine, including a Cody Starbuck story by Howard Chaykin, 'Marginal Incident' by Fables artist Steve Leialoha and, presented for the first time in the original, intended version, 'Siegfried and the Dragon' by P. Craig Russell, one of the first of his operatic adaptations. Also included in the book is [an 38-page Appendix with] extensive information about independent magazines like Witzend, Hot Stuf' and Andromeda that both preceded and followed Star*Reach in its mission to re-invent comics for a more mature audience. It includes a Foreword by Star*Reach founder Mike Friedrich, and a cover by Howard Chaykin!

Mike Friedrich's Foreword, inadvertently omitted from the printed edition of the book, is laid in.