Sign in | Register
HomeNew ArrivalsSuperman/Tarzan: Sons of the Jungle 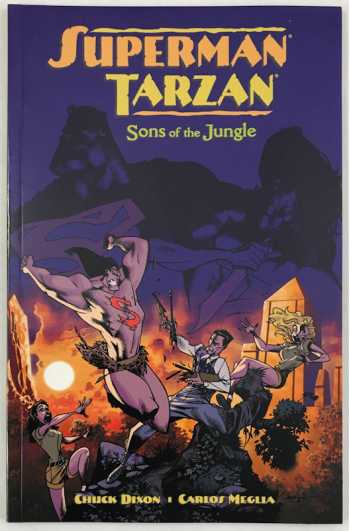 This Meglia mini-series slipped through the cracks at the time. Includes the 3 comic book covers by Humberto Ramos and a new cover by Jason Pearson. Out of print.

A tiny space-pod rocketing from a doomed, little-known world crash-lands in mysterious East Africa, interrupting a vicious mutiny off the jungle coast. Who would know that this single anomalous event would disrupt the known course of time and space? It sets the lives of two legendary comic-book heroes -- Superman and Tarzan -- on very different paths. Orphaned Kal-El, last survivor of Krypton, is now the one raised by apes to become the mighty Lord of the Jungle. John Greystoke, heir to fortune and privilege, now becomes an adventuring wastrel draped in luxury, but not fulfillment. Fate will draw these men together in unexpected ways at the mythical lost city of Opar. Each man will face great danger, and discover his true destiny! Both heroes will be changed forever...if they survive!

Collecting the three-issue mini-series, Superman/Tarzan: Sons of the Jungle #1-3.