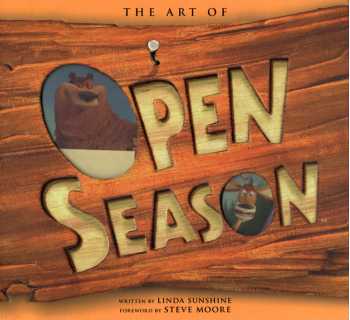 Full of art by Carter Goodrich and Marcelo Vignali.

This book is filled with fold-out, inserts, and mini-booklets.

"Open Season is directed by Roger Allers (The Lion King) and Jill Culton (credits include Monsters, Inc., Toy Story 2) and co-directed by Anthony Stacchi (credits include Antz). The film showcases the Computer Generated (CG) animation created by Sony Pictures Imageworks Inc., an Academy Award®-winning, state-of-the-art visual effects and character animation company, dedicated to the art and artistry of digital production and character creation. Recognized by the Academy of Motion Picture Arts and Sciences, Imageworks has been nominated for its work on Spider-Man, Hollow Man, Stuart Little, and Starship Troopers.

"The Art of Open Season gives you an inside look at an explosion of color and talent, documenting every aspect of creating a CG animated film, from scripting and storyboarding to layout, animation, color, lighting, and visual effects with sensational full-color images throughout."