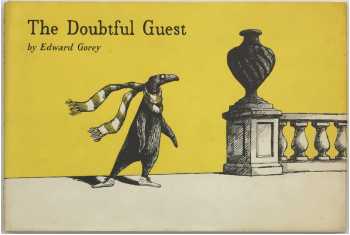 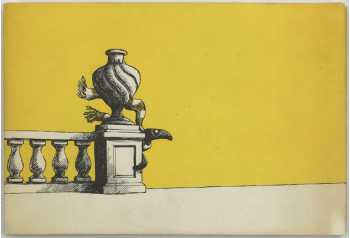 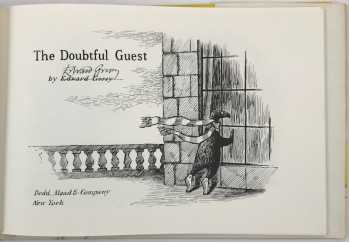 The Doubtful Guest is a short, illustrated book by Edward Gorey, first published by Doubleday in 1957, and reissued by Dodd, Mead in 1978.

This is a sharp autographed copy of the first printing of the 1978 reissue.

Edward Gorey has drawn a line through his name on the title page and signed his name above it.

The Doubtful Guest is the third of Gorey's books and shares with his others a sense of the absurd, meticulous cross-hatching, and a seemingly Edwardian setting. The book begins with the sudden appearance of a strange, penguin-like creature in a turn-of-the-century manor house. An aristocratic family struggles to coexist with the creature, who is by turns despondent and mischievous. By the final page, the guest has stayed for seventeen years, and shows "no intention of going away".

Edmund Wilson, in the 1959 New Yorker article that first introduced Gorey to a wide readership, wrote that The Doubtful Guest was the first of Gorey's books to give a full picture of "the morbid Edwardian household". Wilson described the "black-bearded, towering" head of the family, the Master, whose authority comes into conflict with the visiting creature, "a kind of flat-headed bird, with short legs and penguin wings". The conflict, however, is never resolved: "there is no outcome to the story of the Doubtful Guest".