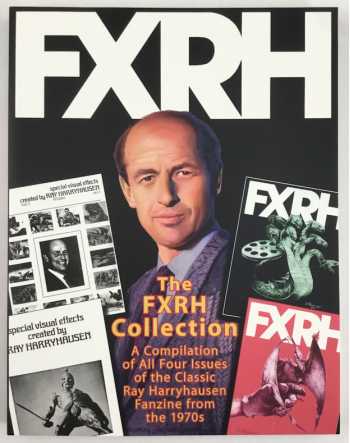 The legendary fanzine published from 1971 - 1974 reprinted in a *Deluxe Edition by the original publishers.

Includes new and rare artwork and photos, many never printed before or since!

Before An Animated Life...

Even before Starlog magazine...

In 1971, Ernest Farino and Sam Calvin teamed up to create and publish the first fanzine devoted entirely to stop motion master Ray Harryhausen. Named for Ray's on-screen credit, Special Visual Effects Created by Ray Harryhausen (or FXRH) made its debut as a 26-page offset publication, side-stapled, with an original print run of only 300 copies. Now, this limited edition softcover book combines all four issues and includes:

All of the above reprint material - presented just as the original magazines were at the time they came out - will be interspersed with:

Cover portrait of Ray Harryhausen by 2012 Rondo Award-winning artist Mark Maddox
An ongoing account of the trials and tribulations of producing FXRH - one of the first animation and visual effects fanzines
Sam Calvin's account of meeting Ray in London in 1971
A lengthy letter from Jim Danforth in reply to FXRH #4 (never printed because there was no issue #5)
New material covering Ray's career in the intervening years
And much more!