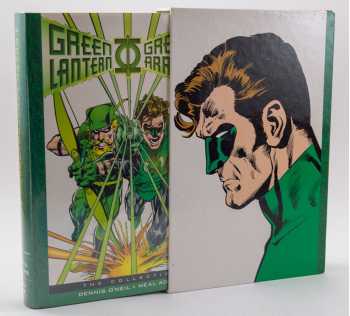 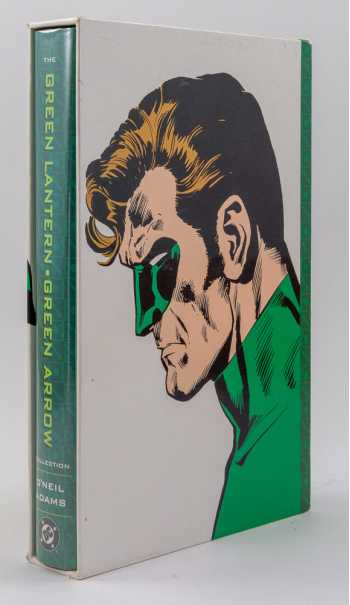 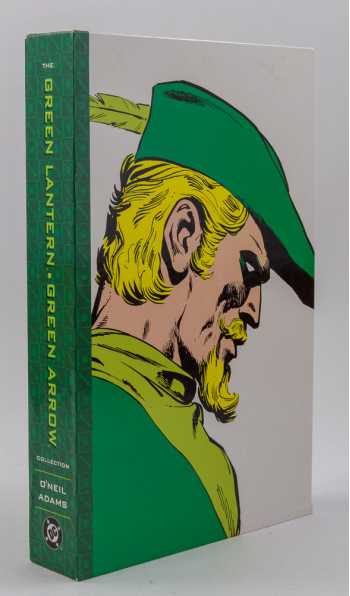 The complete saga in a deluxe slipcased hardcover edition. Reprints Green Lantern 76-87 & 89 and the Flash 217-219 including all the covers. It was subsequently repinted in paperback and as an Absolute. This hardcover edition has the best paper and the best color.

In September of 1969, Neal Adams helped to redefine longtime DC hero Green Arrow in The Brave and The Bold # 85, changing the look of the freshly scrubbed do-gooder into that of a hardened veteran of the streets. Meanwhile, in Justice League of America, Dennis O' Neil was helping to transform the personality of the Emerald Archer from that of a generic hero into something more edgy, more closely attuned to the heated political climate of the times.

One year later, these two creators, guided by editor Julie Schwartz combined their efforts in the pages of Green Lantern. By pairing the feisty, Oliver Queen with his straight-laced emerald-clad counterpart, Hal Jordan, O'Neil and Adams set the stage for a new generation of comic-book characters.

Long a Sci-Fi-oriented hero, Green Lantern had for years spent his time battling threats from outer space, rather than dealing with more down-to-earth matters. Together these "Hard-Traveling Heroes" did more than bust the chops of costumed baddies; they addressed social ills and made us, the readers, pause to think not just of the world of comic-book fantasy, but the world outside our windows.

The Green Lantern - Green Arrow Collection presents, for the first time in a deluxe hardcover format, the complete O'Neil / Adams run on the original Emerald Allies from the pages of Green Lantern and The Flash. This collection marks the thirtieth anniversary of one of comicdom's greatest sagas -- and the mother of all road trips.

In these stories, Green Lantern Hal Jordan continued his usual cosmos-spanning adventures, as he used his amazing power ring to police Sector 2814 against universe-threatening menaces. Meanwhile, on Earth, Oliver Queen, the archer known as Green Arrow, was confronting menaces of a different kind: racism, poverty, drugs and other social ills. When the two Emerald Allies meet again, Jordan is thrown for a loop as Queen takes him on a road trip across America (and eventually other worlds) that opens his eyes to evils and social injustices he never imagined existed. During their trip, they are accompanied by guest stars such as Black Canary and GA's ex-sidekick Speedy, now Arsenal in The Titans - the latter whom has a shocking surprise for his former mentor!