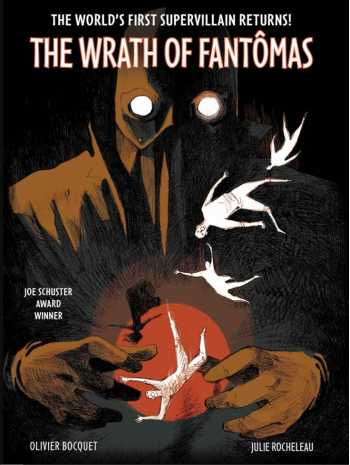 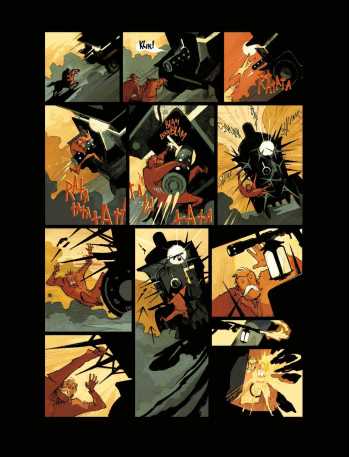 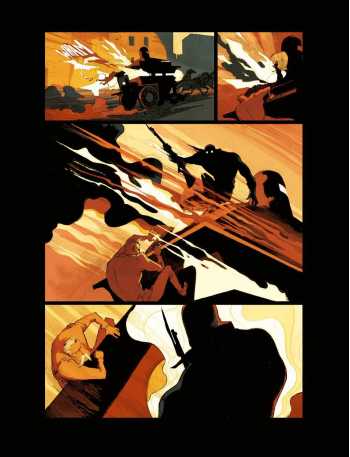 A stunning reimagining of a classic French literary character.

Freely adapted from the work of Marcel Allain and Pierre Souvestre, with a plot worthy of the best black novels, Rocheleau plunges the reader into the Paris of the 1910s and provokes terror and fascination by resuscitating Fantômas, the evil character with a hundred faces...

Fantômas is the first superhero in history. All masked men and women who grace the pages of American comics and movie screens are his illegitimate children. The blood of Fantômas flows in the veins of each of them.

Olivier Bocquet has been a pump attendant on the A6 motorway, event photographer, manager of a restaurant in Montmartre, peddler, invoice controller at EDF, logistics assistant, translator of user manuals for major brand appliances, and sexer of chicks. He has also written and/or directed short programs for French television youth channels, TV trailers, a short film, and a novel.

With The Wrath of Fantômas, Julie Rocheleau makes her professional comics debut. Between 2002 and 2011, she worked for various animation studios, designing characters and storyboards. She has made independent short films, illustrated many children's books an has created posters for cultural events. In 2009, she took her first steps in comics with The Invisible Girl, from a script by Émilie Villeneuve.

"Funny, stunning, grisly and beautifully plotted, with art to equal all those tones with pitch perfection. A remarkable success on all fronts" - Bookgasm

"The Wrath of Fantômas is the type of cutting-edge, yet charming crime story that today's adult comics readers desire. Bocquet and Rocheleau have made a knockout punch of a graphic novel..." - New York Journal of Books

"Succeeds on a scale grand enough for the Sorbonne ... The Wrath Of Fantômas is my favorite comic I've read this year" - Bleeding Cool

"Nothing . . . Everything!" This is how Fantômas, the first true super-villain of the pulps, is described. First published in 1911, Fantômas, written by the team of Pierre Souvestre and Marcel Allain, quickly became a cause célèbre in France. The surrealists, especially the poet Robert Desnos and the painter Rene Magritte, loved Fantômas more than most, as the black-clad arch-criminal frequently performed gruesome acts of murder and mutilation, all the while laughing at the bourgeoisie of Paris and the Third Republic.

Wrath of Fantômas, a lush graphic novel penned by the French duo of writer Olivier Bocquet and artist Julie Rocheleau, is a loving, yet ultraviolent homage to the first Fantômas novel. Composed in gorgeous slashes of reds, greens, oranges, and dark blues, The Wrath of Fantômas is a true feast for the eyes. Rocheleau, who makes her professional comics debut in this title, excels at juxtaposing the beauty of Belle Epoque Paris with the absolute horror of Fantômas's crimes. In one unforgettable scene, Fantômas uses an everyday meat skewer to impale the brains of a certain Madame Flanquet. Mind you, this murder happens while Fantômas is in court and on trial for murder.

Decapitated heads, bombs, machine guns, and trained rats abound in this graphic thriller. Bocquet does such a great job of translating Allain and Souvestre's words to the comics medium that it is easy to forget that this is not a completely original piece of literature. Bocquet and Rocheleau's make two changes to the original novel by adding titans from the early days of French cinema--directors Louis Feuillade and Georges Melies. In real life, Feuillade directed several Fantomas serials starring actor Rene Navarre as the titular villain. Therefore, Bocquet's inclusion of him in The Wrath of Fantômas is especially poignant.

This graphic novel would serve admirably as an introduction to the world of the "Genius of Crime." Fantômas came before both The Shadow and Batman, and his malicious fingertips are all over the "Golden Age" of comics. Wrath of Fantômas proves that a character created all the way back in 1911 has more relevance today than characters created in the 1990s or early 2000s. Fantômas is and remains an obsidian anti-hero--a terrorist by any measurable standard who uses the netherworld of Parisian criminals in order to mock the established order time and time again.

Despite the age of its source material, Wrath of Fantomas is the type of cutting-edge, yet charming crime story that today's adult comics readers desire. Bocquet and Rocheleau have made a knockout punch of a graphic novel, and do not be surprised if there are more Fantomas comics on the way.