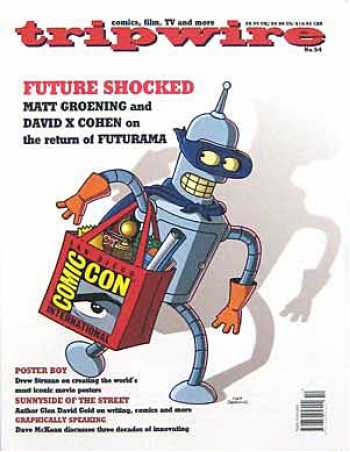 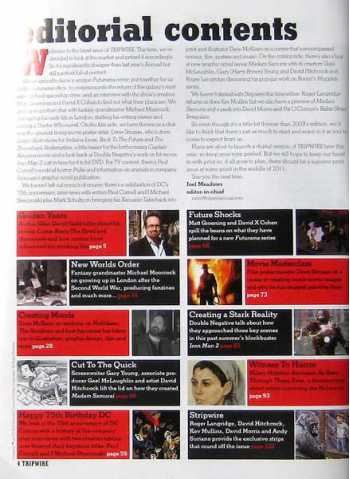 "TRIPWIRE is back with another info-packed issue! The Eagle-nominated British-American magazine about comics and genre culture returns this July bringing even more of the quality features you’d expect from our previous issues."Beneath an exclusive Futurama cover featuring everyone’s favorite robot Bender, we chat with Matt Groening and David X Cohen about plans for their new run of the animated sci fi series on Comedy Central. More TV interest you? How about an examination of the works of Jim Henson and The Henson Company?"Maybe you like movies. You’ll love our talk with with veteran movie poster artist Drew Struzan revealing all about his work on the most iconic movie images in the history of cinema. We also get up to our arms in the special effects of megahit Iron Man 2 with SFX house Double Negative."Do you read books? Author Glen David Gold talks to us about his novels in an exclusive interview. Also, fantasy grand master Michael Moorcock gives us a glimpse into his early career and growing up in post-War London."Maybe comics are your thing. We feature Dave McKean discussing three decades creating his own niche as an artist, illustrator and director. We’ve also got J. Michael Straczynski and Paul Cornell talking about their takes on Superman, Wonder Woman and Lex Luthor respectively. We also cover the various anniversaries of Captain America and DC Comics with in depth articles by our own comics experts. Plus we talk to Titmouse about their new magazine+book. Lastly we end the whole thing with a giant helping of original strips from some of the usual suspects like Roger Langridge."