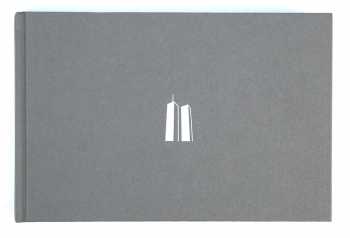 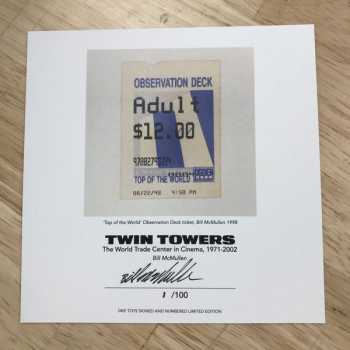 A cool art/film project collecting frames from 250 films that include the iconic Twin Towers. By New York-based artist/designer Bill McMullen.

The book is limited to 1000 copies and this is one of 100 DKE Toys Limited Editions with a signed & numbered illustrated bookplate.

TWIN TOWERS: The World Trade Center in Cinema, 1971-2002 is a new book from artist Bill McMullen, a collection of images from 250 films the Twin Towers appeared in before they were gone. McMullen moved to New York City in 1996, and his East Village studio apartment had a postcard view of the World Trade Center towers, a daily reminder that he was living in the very city that influenced so much of his love of hip-hop, film, music, and art. The Twin Towers were an establishing character in many of the films and television shows he had consumed. They provided an unmistakable shorthand for "Yeah, this story is taking place in NEW YORK CITY."

In real life, the Twin Towers were the metaphorical North Star' for millions of New Yorkers - finding the towers in the skyline was the fastest way to orient yourself towards downtown,' or get your bearings as you exited the subway. Once they were destroyed in 2001, many New Yorkers found themselves reminded of pain and loss every time the World Trade Center showed up in a movie or on TV. In 2017, McMullen turned that energy into a cathartic quest, and began locating and documenting as many instances of the Twin Towers showing up in films as he could. This book is the resulting collection: frames of captured light lovingly crafted into a quilt of cinema, a seemingly crazy mismatch of angles and stories, but which all - for a brief moment - include the same character.

Very Fine, issued without dustjacket
One of 100 numbered copies signed by the author