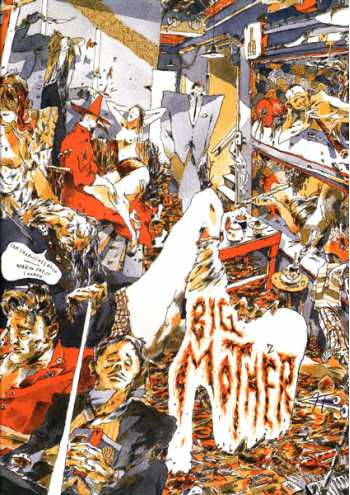 Big Mother #2 is here, this time graced with the awe-inspiring work of Belgian artist/illustrator Sam Vanallemeersch. This stunning A3 format collection of his latest personal work is a testament to the power of drawing and in an edition of just 2,000 copies is sure to sell out fast, don’t miss your chance to own his beautiful art in the flesh!

Antwerp based artist Sam Vanallemeersch, born in 1978, has been taking the illustration scene by storm since he appeared in Thames and Hudson’s 2007 Street Sketchbook, garnering commissions from the likes of Monocle Magazine, The City of Antwerp, Orange, KLM and TBWA/OMD amongst many others. His success as a commercial illustrator has been matched by his popularity as an underground artist with his enigmatic sketchbooks receiving widespread acclaim in the wider design community. Taking not one, but two monikers, Sam’s mind-boggling ability to switch seamlessly from restricted, albeit beautiful, ligne-clair illustration under the guises of his Kolchoz persona, to his noisy, erratic, impressionistic compositions as his mad alter-ego Sovchoz, results in a body of work to leave you utterly breathless and in awe.

Praise for the artist:

“Sam Vanallemeersch is like a coffee tasting Charles Burns or a spatially aware Ralph Steadman. You have to assume he is (probably) drawing all the time, through the night, and that would (probably) explain some of the colours… As the bio goes ‘no human concept is safe from the sharpness of his gaze, no scrap of paper-related material is safe from the sharpness of his pen.’ Paper fears him!”
-- It’s Nice That

“With a name like Sam Vanallemeersch and a sporadic, sketching style that is something like a cross between a hurricane, a box of Prizmacolors and long nights with all the right ingredients- something is making some serious sense here, and its goooood.”
-- Juxtapoz Magazine