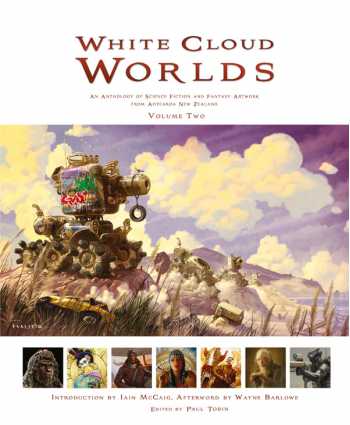 Not generally available in the United States, we offer this beautiful New Zealand import by special arrangement with the editor and driving force behind it, Paul Tobin.

Our copies include an exclusive bookplate with an illustration by Christian Pearce and signed by nine artists:

White Cloud Worlds Volume Two is a visually rich publication that explores the worlds created by 41 New Zealand artists based here and abroad. Each artist is profiled with a selection of their art accompanied by text written in their own unique voice, sharing their origins, inspirations and a rare glimpse into how they work.

This book also includes written contributions from two of the world's leading masters of the imagination -- the internationally acclaimed artists, designers and writers Iain McCaig and Wayne Barlowe.

The work within these pages celebrates not only the skill of the artists but the uniqueness of their ideas. From the beautiful to the bizarre, frightening to fantastical, allow yourself a break from the mundane and get lost in the visually rich creations in this book. You might not want to leave!

Contains works by the following artists: