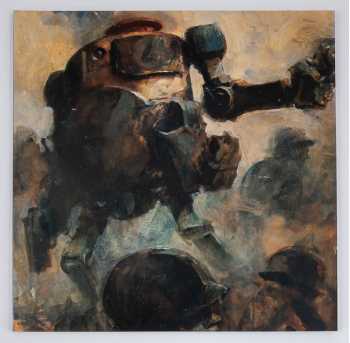 Award-winning designer/artist Ashley Wood (Popbot, Zombies vs. Robots) continues the World War between a dwindling band of humans and robots that spans planets in this oversize epic!

About WWR from IDW:

Award-winning designer/artist Ashley Wood (Popbot, Zombies vs. Robots) has handled his share of robots over the years. And now, he presents total robot war. In World War Robot, a dwindling band of humans and robots face off in a battle that will likely end humanity as we know it... on Earth, on the Moon, and on Mars, too. Badass battles, really intense human/robot drama, and even a little black humor and political intrigue are the order of the day in this oversize (one foot long by one foot wide!), standalone epic courtesy of Wood.

World War Robot is a story told through two art books by Ashley Wood of a world that develops heavy robotics and some degree of space travel, as 1980's Earth is at war with its colony on Mars, which has declared independence. Both sides are supplied with their war machines by Rothchild Industries, based in an impregnable facility on Luna. The shadow organization NOM (Not Ordinary Men) is working towards some unknown motive, with their most prolific member Nom de Plume being something of the ThreeA mascot.

A bit of sunning to the edge otherwise Very Fine