Sign in | Register
HomeNew ArrivalsBeauty and the Beasts: The Art of Hannes Bok 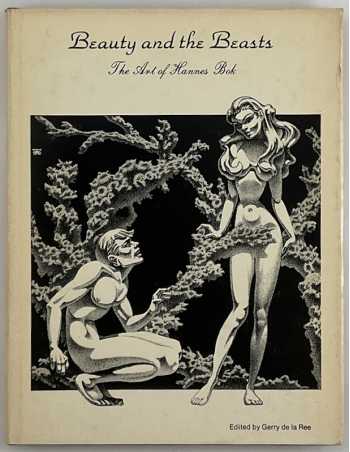 Hannes Bok (1914-1964) is one of a handful of fantasy illustrators from the pulp magazine era to withstand the test of time. Along with such artists as Virgil Finlay and Edd Cartier, Bok's work is proving just as popular today as it did in the 1940s.

This book is the first of its size completely devoted to the quality drawings of Bok, who made his professional debut in the pages of Weird Tales in late 1939.

Bok, born Wayne Woodard, was raised in Duluth, Inn., and began dabbling in fantasy and science fiction art as early as 1930. on the mid-1930s he wended his way westward, first staying in Seattle, Wash., and then spending time in Los Angeles.

During this period he did considerable work for the fan magazines of the day, including Ray Bradbury's Futura Fantasia, a mimeographed magazine that lasted for four issues. It was Bradbury who in 1939 brought to New York samples of Bok's art. When these drawings proved popular with Weird Tales editor Farnsworth Wright, Bok pulled up stakes and came to New York, where he would spend the remaining twenty-four years of his life.

Bok did considerable pulp magazine work throughout the 1940s, and was active as a book illustrator and painter in the late 1940s and early 1950s, contributing to such publishers as Arkham House, Shasta, Fantasy Press, and Gnome Press.

Many of Bok's finest paintings were never published. He either sold them to private collectors or never let go of them. On 1976, art collector Gene Nigra bought the bulk of Bok's estate from Clarence Peacock, a friend and neighbor of the artist who had inherited all of Bok's belongings when he died in 1964.

It is largely from the material purchased by Nigra that this book came to be.