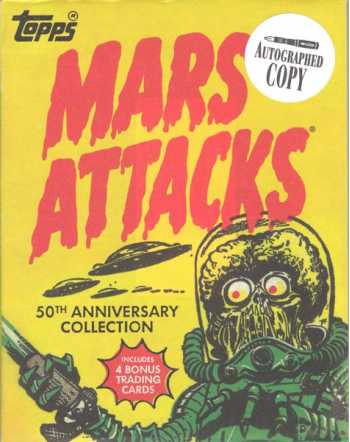 This San Diego Comic-Con 2012 Exclusive is one of 150 copies with a bookplate signed by Len Brown and Zina Saunders and numbered to 150.  It sold out at the convention.

In celebration of the 50th anniversary of Mars Attacks, this comprehensive book is the first-ever compilation of the infamous science-fiction trading card series produced by Topps in 1962. Edgy, subversive, and darkly comedic, this over-the-top series depicting a Martian invasion of Earth has a loyal following and continues to win new generations of fans. For the first time, this book brings together high-quality reproductions of the entire original series, as well as the hard-to-find sequel from 1994, rare and never-before-seen sketches, concept art, and test market materials. Also included are an introduction by series co-creator Len Brown and an afterword by Zina Saunders, daughter of the original artist, providing an insider’s behind-the-scenes view of the bizarre and compelling world of Mars Attacks.