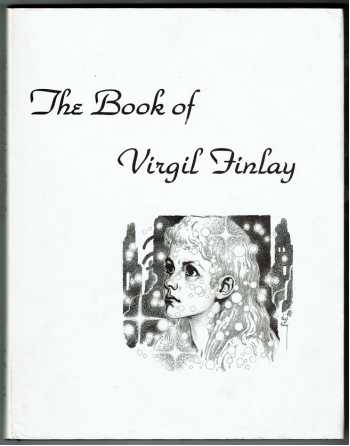 A pristine copy of the first Finlay collection. Quality reproduction on slick paper from the original artwork. With an extra color plate (1964 - A Question of Etiquette by Robert Bloch) laid in.

This is the largest volume of quality artwork by the late Virgil Finlay (1914-1971) yet published. It includes the bulk of the Finlay black and white collection owned by Gerry de la Ree.

lt contains more than 120 Finlay drawings, dating from the early 1930s, including some of his pre-professional work. Emphasis is placed on his post World War II illustrations (1948-54) when the artist reached his peak.

From the time he broke into the professional ranks with Weird Tales in 1935, Finlay quickly assumed his role as the leading fantasy illustrator, repeatedly winning fan polls conducted during the late 1930s and throughout the 1940s. His use of the stipple and cross-hatch styles made him unique in the fantasy field, although in the mid-1950s, with such magazines as Weird Tales and Famous Fantastic Mysteries - his prime markets - gone, Finlay switched to a more simple line style of drawing, which was less time consuming.

Despite a unique illustrating style and a talent that far out-stripped most of his rivals in the pulp magazine field of the period, Virgil Warden Finlay had little success in breaking free of the label of pulp magazine artist.

Finlay did illustrate several books, and the drawings from "Roads" and "The Ship of lshtar" are included in this volume.

It is hoped that this book of his work will help earn the native of Rochester, N.Y., some belated recognition as one of the Twentieth Century's more talented illustrators.