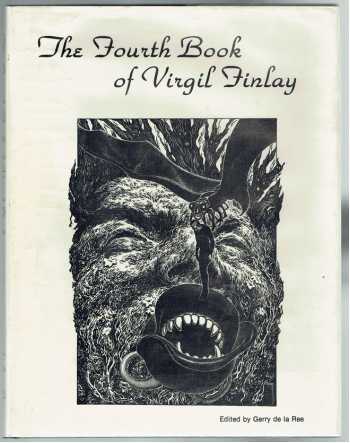 This volume features Finlay's illustrations from 1955-69. Quality reproduction on slick paper from the original artwork.

This fourth collection of the drawings of Virgil Finlay (1914-1971) covers, in the main, the final phase of his magazine career.

The first three volumes in this series dealt heavily with Finlay's pre-1955 work for the many science fiction and fantasy magazines of the period.

With the demise of the so-called pulp magazines in the 1950s, Finlay's drawing style underwent a rather abrupt change. Illustrating for the newer digest-sized magazines, Finlay adopted a more or less straight line type of drawing, saving his fine stipple and cross-hatch work for special projects or higher-paying markets. From the outset of his professional career with Weird Tales in 1935 through the early years of the 1950s, Finlay's pen and ink illustrations earned him top ranking among his peers.

Although he was missing from the art scene for three years during World War ll, Finlay returned from service to take up where he had left off in 1943. His drawings in the 1946-54 period for such magazines as Famous Fantastic Mysteries and Fantastic Novels are generally regarded as highlights of his career.

With the arrival of such digest publications as Galaxy, If, Fantastic Universe, and others, the artist was forced to adopt a new and faster drawing technique to make ends meet. While he continued to draw for science fiction magazines through the decade of the sixties, he found a new market in Astrology Magazine, for which he did numerous covers and interior illustrations.

Finlay illustrated only a few books during his thirty-five-year career. One of them was "The Complete Book of Space Travel", a 1956 nonfiction volume aimed at a teenage audience. He did twenty illustrations for this book, and some of them are published in this edition.

In four books we have now presented an excellent cross-section of Virgil Finlay's artistry, giving some permanency to his work.

Very Fine in Near Fine dustjacket
Limited to 1300 copies